I met TERESA HENNESSY with the Bluetits of the North Pembrokeshire variety, so I can honestly say we have never actually seen one another with our clothes on. Perhaps for decency’s sake I should explain we were modestly attired in very fetching swimsuits because, if you don’t already know, the Bluetits are a bonkers group of committed swimmers and bobbers about in the semi-tropical waters of Fishguard harbour. Oh and the semi-tropical thing… that’s an out and out lie… Its usually brass monkeys.

I wanted to know more about Teresa and Teresa’s playwriting… yes an actual playwright. So over to Teresa to introduce herself. I hope we will hear much more from her in the future. 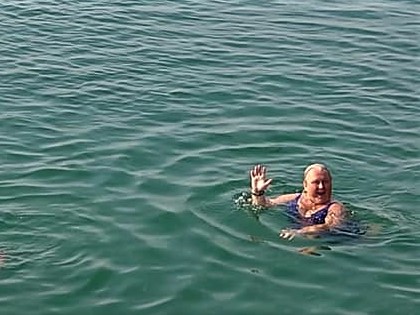 “I was born and brought up in Fishguard. Fishguard girl through and through. I always loved writing. I remember winning a writing competition organised by Miss Kelleher in class 4 at the Catholic primary school in Vergam Terrace. I remember nothing about the story, the characters or whether I got the spelling right, only how wonderful it made me feel and the lifelong enthusiasm it sparked at such a young age.

Theatre was another love from an early age. I was very fortunate that my parents, James and Val, drove me down to drama classes and courses at the Torch Theatre in Milford Haven. At that point, in the Seventies, Theatr Gwaun in Fishguard wasn’t the fabulous multi-use venue it is today but a cinema only called The Studio where all us kids went every Saturday morning to the cinema club run by Mr and Mrs Smedley. 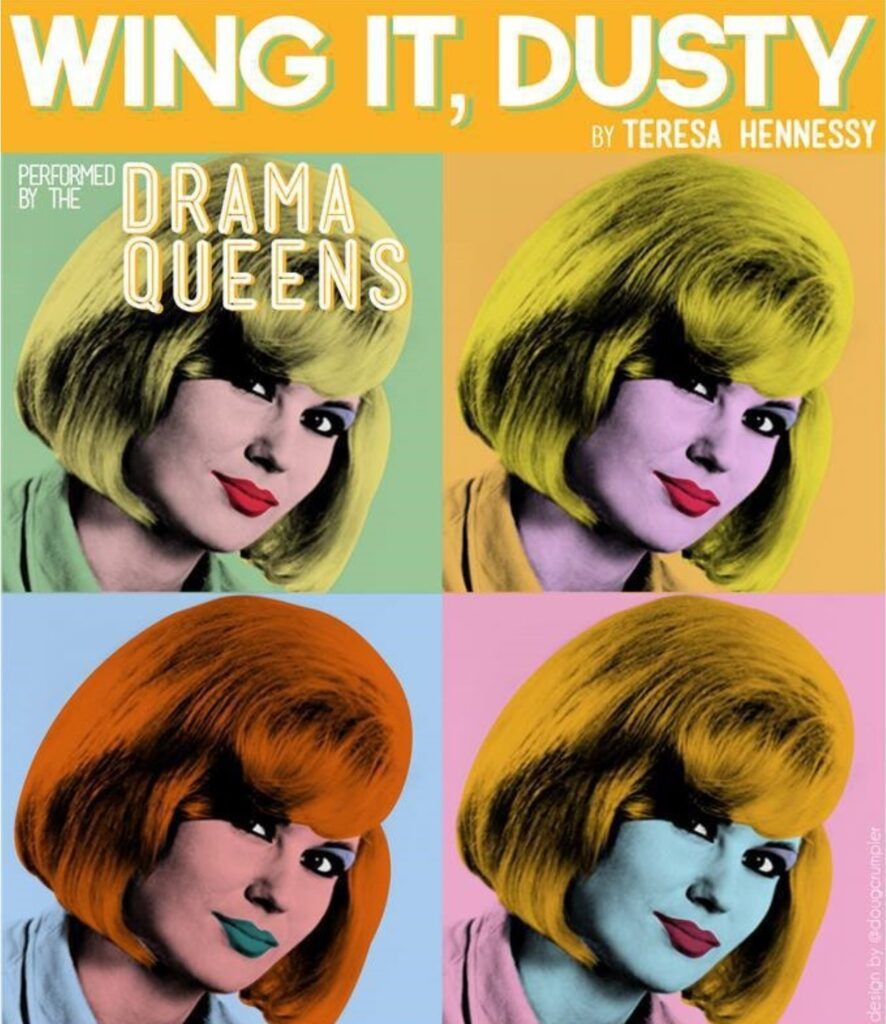 One of Teresa’s plays, Wing It, Dusty. Image by Jennifer Scott-Reid.

Once in Fishguard Secondary School (as was) the one teacher who really believed in me was Miss Collins, Sue Collins from Loughor in Swansea. A fantastic drama teacher who pointed me towards drama college.

I attended the Royal Welsh College of Music and Drama in Cardiff from 1980 to 1983. Acting in rep theatre, touring the provincial theatres all over the UK, provided me with great memories and allows me to put my hand up for any UK geography questions on quiz nights!

By my mid-fifties, I had still never gone to the Edinburgh Festival. A friend suggested we start up a theatre company in which I write the plays and my friend would direct them. We’d both act in them. So a five-year run of two-hander plays journeyed to the festival every August. Walking up and down the streets of Edinburgh handing out leaflets, pasting posters on walls, trying to compete with the other 2,000 productions on at the same time. An exciting, exhilarating, if a little tiring, experience.

Teresa in A Child’s Christmas in Wales

I love observational comedy. Victoria Wood was, and still is, my favourite writer. Tina Fey is a really clever writer and one of my favourite US programmes is 30 Rock. Kathy Bates is a hugely talented actor and director. I can watch her performances, especially in Dolores Claiborne, a Stephen King adaptation, again and again.

I’ve written seven plays, (two published), one pilot and three episodes of a TV series (set in the twin towns) and a series of short stories.

The things that make me crazy are injustice, rudeness and a lack of empathy. But my loves are  swimming with the North Pembrokeshire Bluetits and friends around the Fishguard area, listening to true crime podcasts… oh, and writing.  I always love writing so watch this space.

A little about one of Teresa’s Plays

Wing it, Dusty, a play by Teresa Hennessy directed by Jennifer Scott-Reid, premiered at Theatr Gwaun, Fishguard, on  27 July 2013. It tells the story of Deirdre and Roni who make the perfect couple. Maybe. Deirdre wishes Roni was Julie Andrews; Roni wishes Marni Nixon had dubbed Pierce Brosnan in Mamma Mia!. They don’t even have the same taste in music except for the divine Dusty – both flawed, but comically grasping onto their world of reality by their fingernails in an attempt to help them get through the most important day of their lives. Planning for their big day, they will make you laugh out loud, but there’s a twist – and will they be left laughing?