To Speak for the Trees 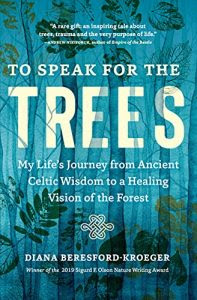 “The ancient knowledge of the Druids and the Brehon Laws, kept safe, refined and handed down from one generation to the next for millennia, was on the verge of being lost. Instead, it was given to me, an understanding of the healing powers of plants and the sacred nature of the natural world that remains the greatest gift I have ever received.”

Any of us brought up and educated in this modern era ruled by rationality and science might feel somewhat surprised to learn that these words were written, not by some New Age pop-prophet but by one of the most highly qualified and experienced botanists and medical biochemists alive in the world today.

In this utterly fascinating autobiographical book, which is also a treasure trove of information abut trees and plants and the crucial importance of forests, Diana Beresford-Kroeger tells the story of how she, the orphaned child of an Irish mother and an English father, was entrusted with the sacred legacy of ancient Celtic knowledge about the natural world that would otherwise have disappeared forever when her last elderly Irish relative died.

It is an extraordinary story. But the most amazing thing about the story – and the one which I found the most interesting and exciting – is that not only did the author learn and fully absorb an incredible amount of ancient, traditional knowledge about the healing powers of a huge range of plants, she later, as a scientist, made it part of her life’s work to research, understand and explain precisely the scientific, biochemical facts underlying every single one of those old herbal prescriptions. It was a wonderful marriage of science and sacred wisdom that is very rarely found in our culture.

The book contains a number of examples of this sort of cross-validation. My two favourites are not about herbal medicine as such but about our human interactions with trees. First, we know that any time we walk into a forest we start feeling good – so much so that the Japanese recommend “forest bathing”. We now know that trees give off a certain chemical that has a beneficial effect on the human nervous system.

Secondly, the Celts believed in the sentience of trees and that some people could feel it in the form of a certain energy or sound that their bodies picked up when around trees. They even had a special word for this in Gaelic. Science has recently discovered a sound frequency called infrasound. “These are sounds pitched below the range of human hearing, which travel great distances by means of long, loping waves. They are produced by large animals, such as elephants, and by volcanoes. And these waves have been measured as they emanate from large trees.”

Trees figure hugely in the book, for they have figured hugely in this author’s life. One day when she was 15, while cutting turf with her uncle in a bog, they uncovered a large chunk of bog oak—a long-preserved fragment of what had once been an oak tree, back in the days when that land was covered with forest. When her uncle explained what it was, she wept for all that lost forest. Many years later, as an adult living in Canada, another stage of her life’s work became focused on reforestation, and the book contains some inspiring anecdotes about the rediscovery and regeneration of rare trees.

The second and final part of the book, which Beresford-Kroeger describes as the second main gift arising from her unique history plus her scientific training, is her own extensive annotation of the ancient Ogham script, “the first alphabet of Europe, in which every letter is named for a tree or an important companion of trees”.

Overall, I found this to be a truly remarkable and wonderfully informative book.